The Kansas City Business Journal recently published an op-ed about the affordable housing market crisis in KC. It highlights some new developments that may shift the balance of geared-to-income units from 23 percent to about 15 percent of downtown rentals.

To summarize, it talks about 5000 new market-rate apartments that are either under construction or in the planning stages, suggesting that a recently rescinded development tax credit program will kill the impetus to build affordable housing.

With rents sometimes as much as double what they were a decade ago, this could indeed be a looming crisis, resulting in a scenario similar to what has already happened in San Francisco, Austin, and other booming American cities.

With such a serious issue looming on the horizon, a viable solution is in order. Co-living residences can provide such a solution, offering affordable, convenient shared accommodation that satisfies both supply and demand.

Hailed as one of the biggest disruptions in housing since the apartment building itself, co-living has attracted some big investment, despite mixed reviews regarding its success. Still, the concept is sound. If done right, it could provide the answer to KC’s affordable housing needs as well as giving developers a new platform to expand upon.

In a nutshell, co-living is a collection of micro-units that share common spaces and amenities, electronics (televisions and such) and, occasionally, shared facilities (kitchens and bathrooms). Co-living sells itself as an all-inclusive business model that caters to students, low-income individuals, transient or seasonal workers, and any other individuals who would benefit from budget-friendly digs.

The units themselves are significantly smaller than a standard apartment—hence the similarity to micro-units—but would meet every human need and would be furnished and move-in ready, reducing the onus of investment on the part of the renter.

Co-living has its champions and its caveats. It purports to offer a higher standard of living at an affordable price, but that’s not often the case – at least not where price is concerned.

As one of the larger co-living providers in the US market, WeLive has not found the success it was after. From the outside, it resembles a social engineering experiment with its insular, arguably Orwellian community of residents who can move in with little more than the clothes on their backs. In reality, it caters to a very specific demographic, offering luxury amenities that are included in the rent – which is nowhere near “affordable” by any stretch. While it would probably be less expensive and more convenient than a comparable area hotel room, as a business model, it is definitely not designed for lower-income residents – which is likely the reason they have decided to halt any further expansion.

In other cities, developers are experimenting with co-living, but widespread viability still remains to be seen. The startups at the forefront of the movement have necessarily had to partner with local developers and landlords to manage the day-to-day.

Personally, I have been thinking about a concept that goes beyond co-living and micro units, one that would be a perfect addendum to this discussion. While each of these concepts shares similar themes, my idea is to expand on the micro-unit philosophy, leveraging creative, space-saving layouts and furniture that emphasizes economy, durability and value.

Closer to home, we have recently identified a development opportunity in Atchison, Kansas. We are currently seeking development partners for the historic Martin East Elementary School, near Benedictine College, in my opinion, an excellent location for a co-living accommodation.

Developers who have an interest in exploring the concept of co-living apartments in Kansas City or who would like to pursue the development opportunity mentioned above are invited to reach out to B+A Architecture. 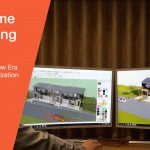 Next story :Real-Time Rendering: Ushering in a New Era of Design Visualization

Four years ago, the B+A Architecture team was delighted to help Chris and Megan to achieve their dream of owning a unique 2-story tiny home. This summer, we checked back in on the KC Tiny House Project to see how it’s developed since our original design. We were stunned by how beautifully the tiny home […]

3260 Main Mixed-Use and W39 Apartments are two KC Midtown development projects B+A Architecture has been working on for FFV Development, LLC. 3260 Main is a $17.2 million mixed-use project located at 3260 Main Street. It’s a six-story mixed use building with 82 apartments and about 7,500 square feet of retail on a vacant lot […]

Midtown Plaza Phase 1 (3420 Broadway, Kansas City) construction progress. We’re grateful for the construction team who has been safely doing such a great work. ? It’s keeping us all motivated to see the progress of the project and the final outcome! Latest News Post Views: 1,215 B+A Member since May 26, 2020 Loading + Follow Following An […]

Breaking ground on a project that you’ve worked on for months is always an exciting moment. We were delighted to see the ground broken at 2600 Independence Boulevard in Kansas City last week.  This project has a special place in the hearts of the team here at B+A Architecture. The developer first came to us […]

Expedite The Approval Process of The City

Midtown Plaza, the 8-story complex renovation is underway after a hold up of almost 4 years

The Midtown Plaza, located at 3420 Broadway, Kansas City, is well on its way to entirely change the outlook of the area by converting the vacant office building into 117 multifamily apartments in Phase 1. The 8-story complex renovation is underway after a hold up of almost 4 years and is scheduled to be completed […]

Work in progress! A sneak peek into the construction progress of our clubhouse and pool projects with Summit Homes. We look forward to seeing these new clubhouses and pools that will provide full enjoyment for all residents. Construction is expected to be complete by early April. Our B+A team is glad to be involved and […]

The Future of Dining Out: Trend Predictions on Post-Pandemic Restaurant Design

As long as humans have roamed the earth, we have participated in the communal activity of sharing meals. Togetherness is part of the human experience, as is sitting down to eat. When you combine the two, you get the perfect evening out – or, at least, that used to be the case. The global health […]

Ideas for Redesigning Offices after The Pandemic

Redesing workplaces needs careful consideration. The goal is to reshape how we work while delivering productivity and keeping social distancing.

Real-Time Rendering: Ushering in a New Era of Design Visualization

Real-time rendering is on the rise throughout the design industry. In light of this trend, any sector that focuses on design as a guiding principle—architecture, entertainment, fashion, engineering, and so on—is likely already putting it to work for them. Since the 1990s, we have leveraged computers and CAD software to render our designs and this, […]

Value Engineering: what does it mean in the scope of construction?

When an architecture design or construction project goes over-budget, the most common way to mitigate concerns is through value engineering. However, value engineering is not based on cost-cutting alone. The true value of this process considers every possible option and never loses sight of the desired end result. What is Value Engineering? The term value […]

2020 is an exciting year for the team at B+A Architecture. The company is celebrating 25 years of successful practice. To mark the occasion, Principal Dennis Bradley shared his insights into what has enabled the firm to survive and thrive for so long, as well as what’s in store for the next five years.

Recently, B+A is working with Summit Homes on a Colorado mountain-style clubhouse of Woodside Ridge at Lee’s Summit, MO. With 7,650 sqft pool + deck, this 1,700sqft upscale clubhouse emphasizes the use of natural materials such as stone and cedar, and maximizes the glazing on the elevation facing the pool deck. It also includes a […]

Grand opening of the Reserve 77 Clubhouse

B+A took an extant 70’s mansard style clubhouse and freshened it up with modern cladding in the way of corrugated aluminum siding accented with cedar planks, and gave it an updated color pallet for a take on Modern Mansard Style.

We’re architects and ANIMAL LOVERS! This year, we worked together with a Kansas City based nonprofit organization to design a 3-acre animal boarding facility.

The Jackson County Legislature has recently approved a zoning change for the repurposing of the extant John K. Stark School, located at 17th & Stark Avenue, Blue Summit, MO, into a residential re-entry facility. B+A Architecture was hired to provide preliminary design for the proposed adaptive re-use, and for the modernization and renovation of the existing […]

West Plaza Flats is a co-housing and studios project near the Country Club Plaza area in Kansas City. It will provide rooms for 350 persons in a co-housing environment. On the North end of the project will be a commercial space that will also incorporate some of the amenities for the residents, along with a […]